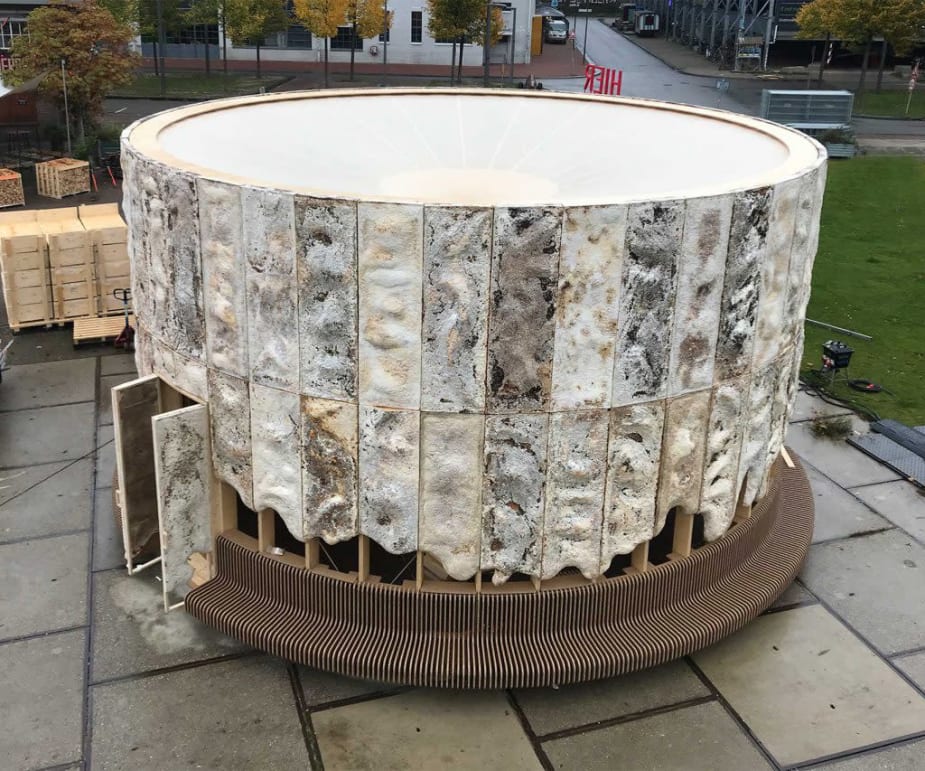 If you’ve never heard anything about houses made of mushrooms, it’s understandable if your first mental image is of something like a cute, top-hatted cartoon elf posing proudly in front of his bright red polka-dotted cartoon mushroom-domed cottage. So, when the Wall Street Journal features “fungi” as leading contenders to become tomorrow’s leading building materials, it’s clear that henceforth we will need to regard toadstools with more gravity. Certainly, Architectural Digest does.

“Your Next House Could Be Made of Mushrooms” was the Digest’s serious take on the subject, although that article’s subhead— “A delicious development in sustainability”—seemed to acknowledge the tongue-in-cheek possibilities. Nobody is proposing a future of edible buildings. The immediate goals of the blooming “mushroom renaissance” are strictly structural.

Mushrooms, it turns out, are actually nothing more than the flower of a greater organism that reproduces by rapidly sending out webs of gauzy white threads (mycelium). Webs of this fast-growing organic material are now being experimented on to create vegan bricks, furniture, and composite floor tiles.

Designers choose from a variety of organic materials like cardboard or sawdust, then shape them into substrate forms that will be useful in construction. Next, they inoculate the substrates with the root-like mycelium, which rapidly “enfolds and digests” them. The mycelium acts like a glue so that, after the biological activity is complete, a solid mass of finished material has been created.

Brick shapes have received a lot of experimental attention because mushroom bricks have some terrific properties. The substrate materials can be very inexpensive, and the mushroom “takeover” quite rapid. All that is left are some finishing steps. Bricks, for instance, need to be dehydrated, compressed, and baked—but the resulting material is terrifically sturdy (they have more than twice the compression strength of concrete blocks), impact-resistant, fire-retardant, and lightweight. In today’s environmentally-focused world, its biodegradability is attractive, as is the promise of replacing traditional carbon-producing structural materials (they account for nearly a quarter of the world’s carbon emissions).

So if some misty morning, you spy a patch of toadstools that have sprouted in some Fishers yard, you could be witnessing a manifestation of the lifeform that will one day save the planet. Until some practical production details are solved, though, the walls of your next Fishers house will need to have been built sans fungi. Call us when you’d like to look into today’s options!